This is the mirror molding I painted for Debbie's master bath. 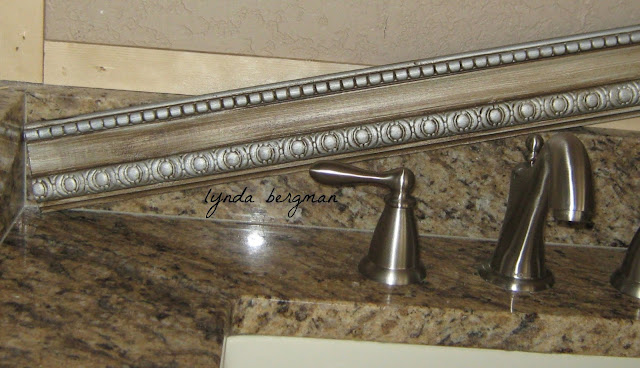 I painted it metallic silver and then aged it.  Because there were two very large mirrors, I had to paint eight 8' long pieces multi-layers and then do that tiny detail work and seal it.  My back was very uncomfortable bending over like that.  Believe me, I was ready for that to be OVER!!
After it's installed, I'll try to go back and get photos of it with the mirrors.
Process:  Primed, sanded, painted, aged and detail work, then two coats of sealer.
Posted by Lynda Bergman Decorative Artisan at 2:10 PM 4 comments:

Today, Debbie is very, very happy!!
The six weeks long renovation of her master bath is almost over.  They asked me to paint a special finish on their bath and closeet cabinets and I finished painting today. 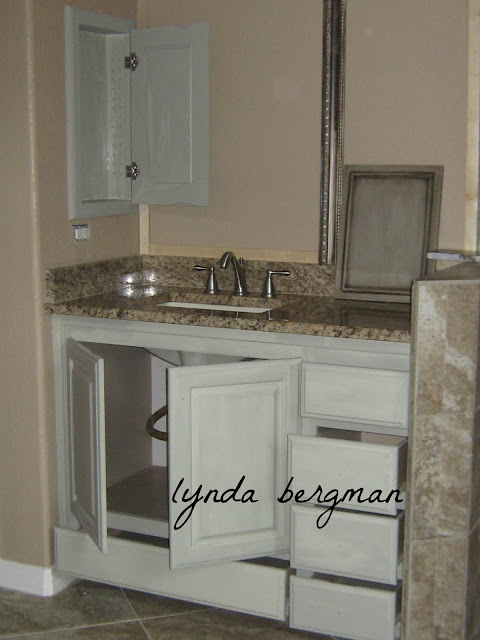 Her cabinets were pickled/white washed oak.
I forgot to take a "before" photo and this is after I primed the wood.
They were working with a decorator and asked me to do them a sample board with a gray browny dark finish.  My sample is what you see on the counter top.  Also, I'm painting a special finish on some mirror molding and I showed them several different ways and depths of color.  They liked that I had given them several choices and they picked out how they wanted the molding to be painted. 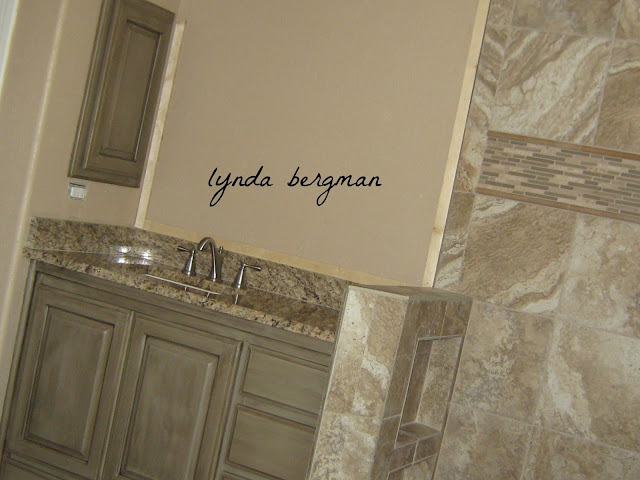 This is the special finish that I painted and it looks soooo good with their new granite and floor and shower tiles.  Their bathroom is really big and that shower tile is a special feature to me.  I love that tile and how everything looks so good together.
They're going to have a seamless glass enclosure around the shower.
Won't that be beautiful, too. 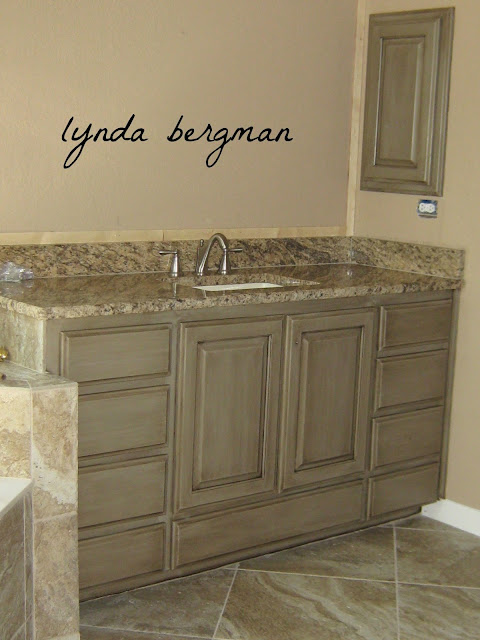 This is the other side of the room.  (Waiting for the lights, mirrors and molding to be installed.) 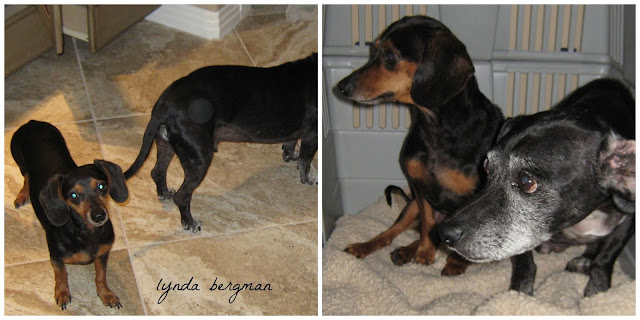 AND, here are Penny and Yankee.  They kept coming into the bathroom to make sure I was staying busy.  Penny kept pulling on my socks.  As I was leaving, I wanted to take another picture and had to wake them up.  They weren't too happy about that and wouldn't even look at me.
"Go away!!  I'm trying to nap, here!" 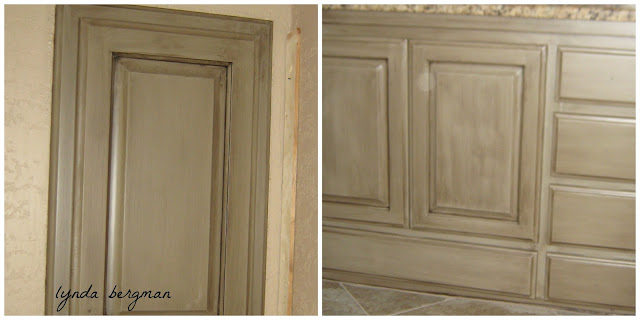 A close up of the cabinet finish.
A few years ago, I painted Debbie's kitchen and dining room cabinets a special finish, too.
It's so nice that they asked me to come back for the master bath re-do.
Everything turned out really beautiful!
Thank you, Debbie!!
~
VISIT MY ONLINE STORE
LYNDA B CO.COM
Posted by Lynda Bergman Decorative Artisan at 6:28 PM 44 comments:

Hi there,
Anyone who might be wondering where I've been, I've been on back to back jobs and believe me, I'm WORN OUT!!  This is the time of year that my clients start creating and planning how they want their homes to look for the holidays. It is a bit stressful, finishing with one job so I can move on to the next client who is waiting.  I love my work and love the transformation and am so glad they choose me to work with them. In these photos, I'm working on Christa's kitchen island.  I finished her kitchen a few days ago.  She was looking for knobs and handles and wanted something special and unique.  She did her research and hunting and I wanted to wait for photos until those were installed.  They are just beautiful in her kithcen.
I really enjoy working on my blog and am looking forward to getting back to posting, soon.
Posted by Lynda Bergman Decorative Artisan at 4:22 PM 2 comments:

The builder of this New Orleans style house asked me to paint the master bath cabinets a distressed black.  Also, he asked me to do an embossing design on the doors in metallic silver and gold. 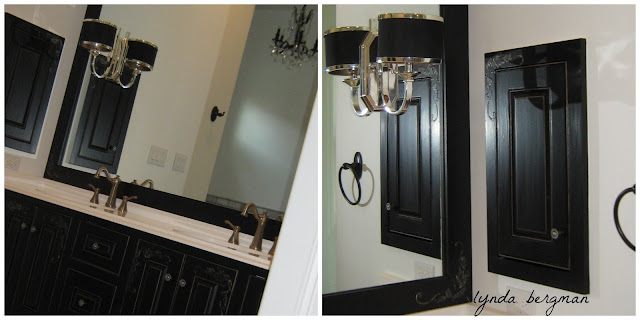 This bath has a clawfoot bathtub with a black and silver chandelier hanging over it. 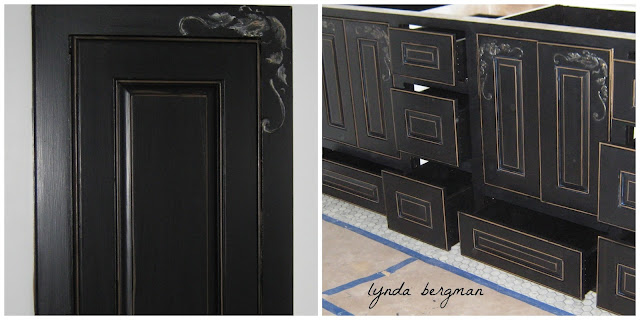 Then, he gave me a mirror frame and asked that I paint the same finish and embossing on it. 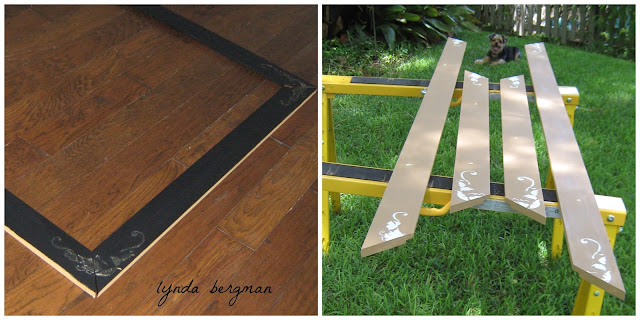 I worked as fast as I could because he was having the mirror installed and needed this frame to help secure it in place. 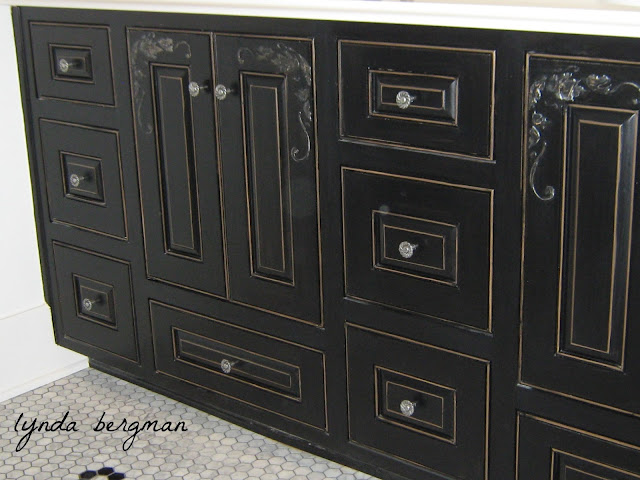 Today, I had to go back to touch up the tiny nail holes made when they installed the mirror frame.
All of my work is finally finished and I'm really proud of the way everything turned out.
They gave me some really special "custom" things to do.
Tomorrow, the house is closing and I'm sure the new owner is thrilled to be moving in.
Thank you, for letting me be a small part of this beautiful home.
Posted by Lynda Bergman Decorative Artisan at 9:02 PM 40 comments:

Do you know the name of this flowering vine?
Years ago, I was driving through an older neighborhood and saw this vine growing on a fence.  It was sooo beautiful and in full bloom.  I knocked on the homeowner's door and asked about the vine.  She didn't know the name.  She said a friend gave her some seeds a long time ago and she's always let it grow on that fence.  I asked if she would share some seeds with me.  Months later, she called and had a large sack of seeds for me.

It is similar to a wisteria, but the leaves are very different.  It is a legume.  The large seed pods look almost like a large okra and have several beans inside. 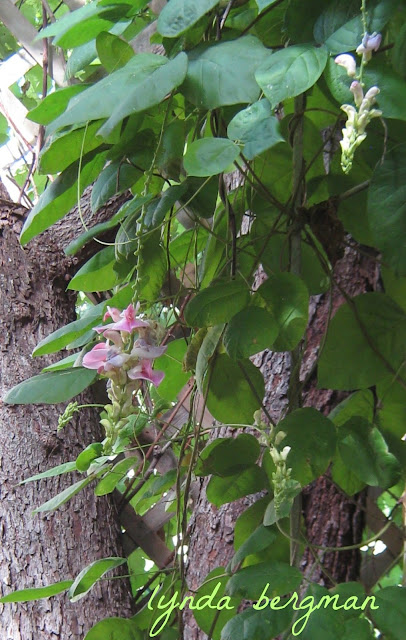 All of these little green flower buds look like a stalk of bananas and will turn into the large pink flowers.  Then, as the flowers have dropped off, a seed pod will start growing.
I love vines and really love this one.  I've planted it in several places because I never want to lose it.  It's very hardy and comes back, year after year, no matter how bad the past summer was.
Can you help me identify this vine??
Posted by Lynda Bergman Decorative Artisan at 6:39 PM 15 comments:

When I went back for touch-ups at the New Orleans house, the chandeliers were hung and the canopies at the base looked sooo bare against the ceiling.  I knew they would look so much better with ceiling medallions and I mentioned it to the builder.  He asked me to go purchase and paint three for these particular chandeliers.  Then, he called me and said the electricians would be there the next day and could I have them there by 10: am.  I panicked, but got it done. 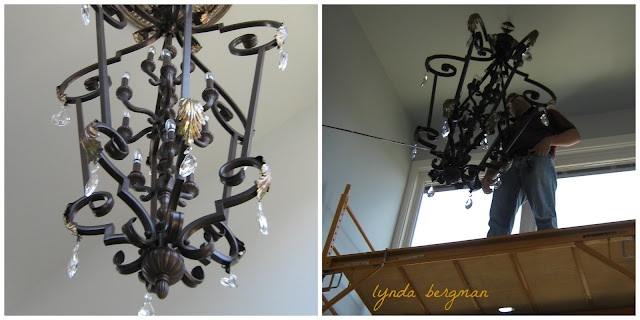 This HUGE chandelier in the stairwell had a tiny, dinky chain and I mentioned that it needed a chandelier chain cover.  So, the builder asked me to go find one.  The electricians were already there, taking down the chandelier, so I had to hurry over to Steinmart to see if they had any chain covers.  They didn't and I was walking around the store, back and forth, searching for something that could be wrapped around that dinky chain on the huge chandelier.  Anything, a scarf, anything that could wrap around that chain.  THEN, 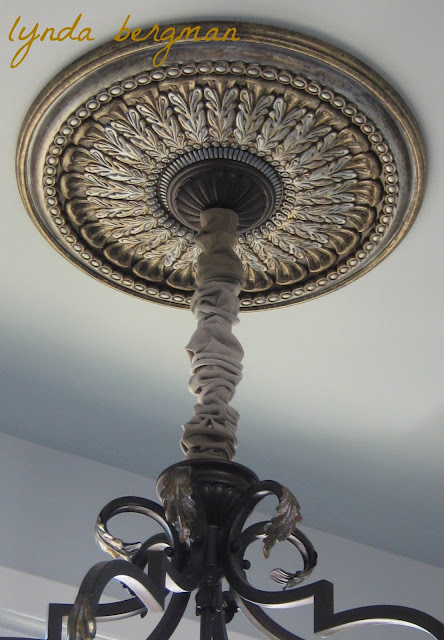 WAY ACROSS THE ROOM I saw some men's socks on a big wall.  Perfect!!  They  had some really good colors that would match the chandelier and the ceiling medallion that I had painted for it.  So, I bought a pack of three pairs in slightly varying shades and rushed back to the house to get them on the chain, so the electricians could hang the chandelier.
It looked wonderful!!! (thank goodness) The socks were hunky chunky and looked so much better than the beautiful silk chain covers that you usually see. 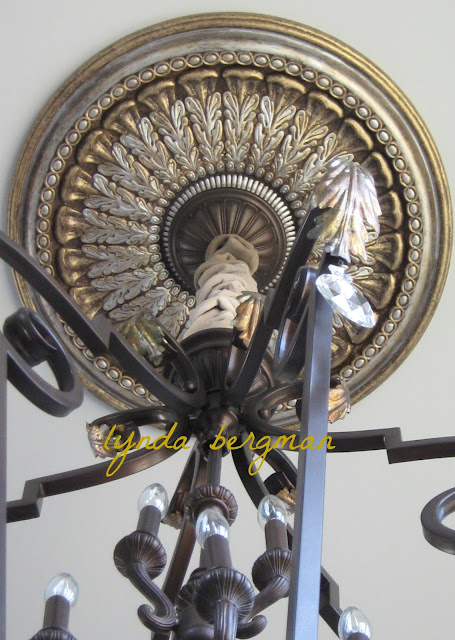 This is the ceiling medallion I painted to match the chandelier.  It's a lot of detailed work to paint these, but always look so, so nice on the ceiling. 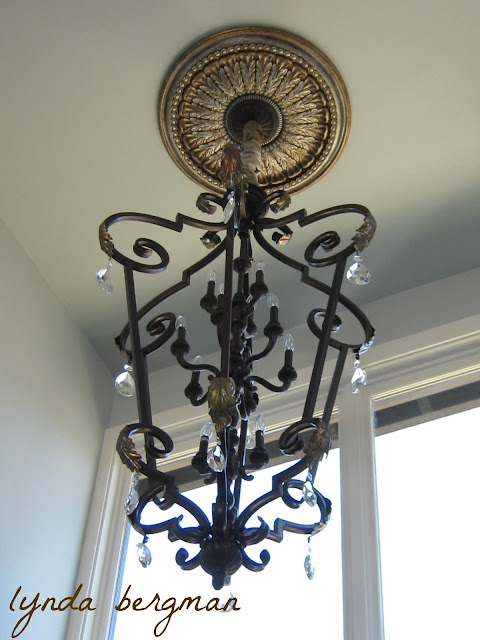 This fixture looks so good with the wrought iron railing in the stairwell. 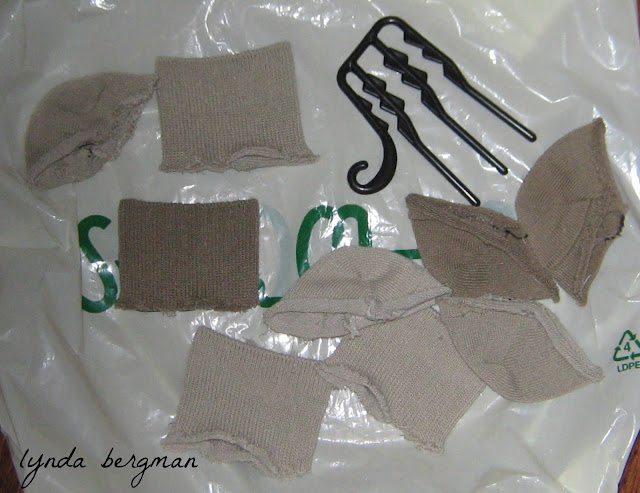 These are the sock colors that I liked for the chain cover.  I cut off the toe and the stretchy part at the top of the sock.
Finally, everything was finished.  I was worn out from all of that running around but, it felt good when the homeowner (to be), the builder, everybody was happy.
I was very happy, too!!
When you need a chandelier or fan chain cover, remember socks.  I think they're great!  Not sure why we haven't thought about them, before.  They come in such nice colors, men's, women's, children's and are a really good choice compared to the ones you usually find, already made. 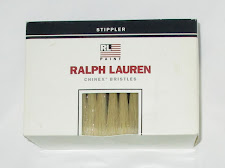 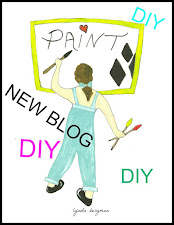 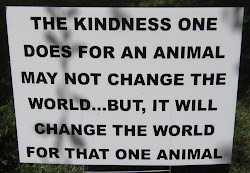 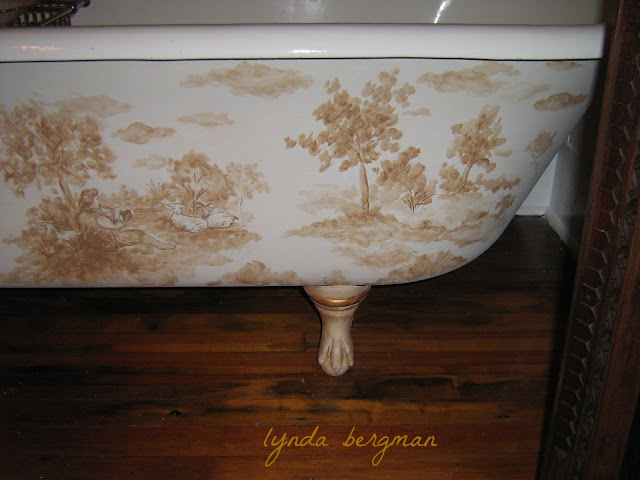